The operational ratings of an engine are all related to the revolutions and there is some variation in the classification for commercial and military engines to account for the difference in type and use. Ultimately, the ratings are limited by the maximum operational thrust that the engine can deliver at different altitudes and effectively correspond to the position of throttle levers in the cockpit.

This is the maximum allowable thrust setting for take-off and can be achieved using water injection. As the lever is set to the respective position, it is important to monitor the pressure at the turbine outlet or the pressure ratio of the engine. This setting is intended for use during take-off only (up to 5 minutes), can only be used below a certain altitude and is, of course, available only if the engine is equipped with a water injection system.

This is the maximum allowable thrust setting for take-off without a water injection system. This setting corresponds to a certain engine pressure ratio that varies slightly depending on the atmospheric conditions. Even though it can be used at any altitude, it should be reserved for take-off and it is a time-limited setting.

As the name suggests, this is the thrust setting at which the engine can operate for prolonged periods of time. It is rated slightly lower than the take-off thrust, but noticeably higher than the cruise thrust and should be used for emergencies or when the pilot deems it necessary to do so. The time limit does depend on the engine but it is generally advisable to limit this to less than 30 minutes.

This is the maximum rated thrust for climbing and, in some jet engines, it might coincide or be very close to the maximum continuous thrust.

This is the maximum allowable thrust setting during cruising and it is lower than all of the above.

Even though idle isn't strictly a rated thrust level, it is included for completeness as it is a position for the throttle lever. It represents the lowest possible thrust on the ground and during the flight that the engine can support. 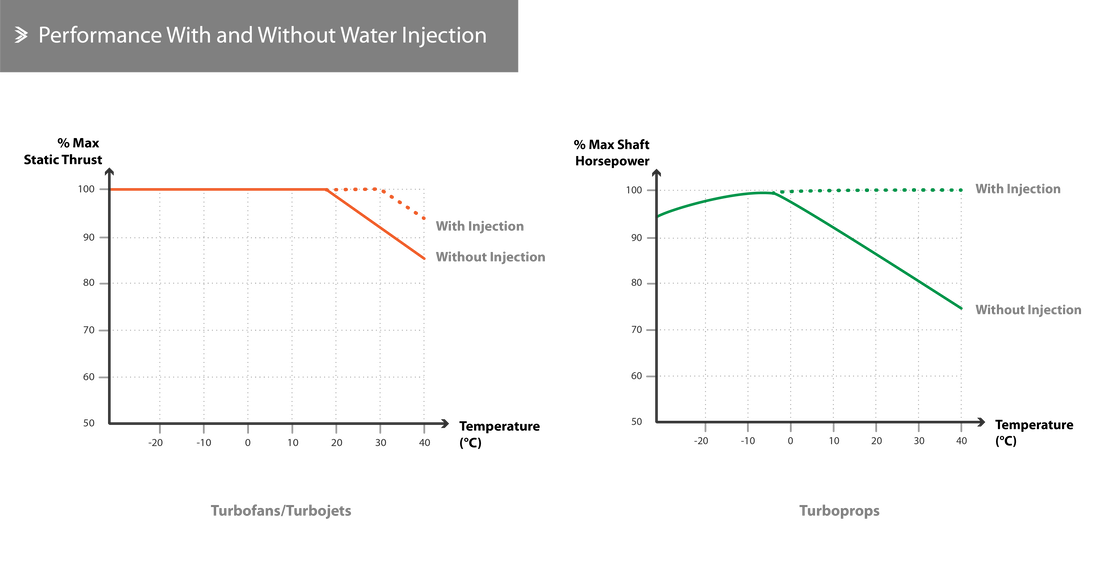 This corresponds to the absolute maximum thrust an engine with an afterburner can deliver and is engaged by pushing the throttle lever to the furthest forward position and activating the afterburner. This is a time-limited thrust setting as it comes very close to the operational limits of the engine. In extreme cases, the use of an afterburner can be tolerated for up to 30 minutes, but it's often used for 15 minutes or less.

The maximum take-off thrust is also engaged by pushing the throttle lever to the furthest forward position but instead of afterburning, water injection is enabled. As before, the setting typically corresponds to a pre-determined engine pressure ratio or turbine outlet pressure to be reached. This setting is intended for use during take-off only, it can be used below a certain altitude and is, of course, available only if the engine is equipped with a water injection system.

This is effectively the take-off thrust of a jet engine without the use of afterburning or water injection. The throttle lever is still pushed all the way forward and, although it is designed for non-time critical take-offs, it can be used continuously for no more than 30 minutes.

This thrust setting is lower than all of the above and can be used without a time limit at any point during the flight.

Again, idle serves the same function in setting the engine revolutions to the lowest possible for sustainable operation.

A Note On Thrust and RPM

Although a higher thrust rating will correspond to faster revolutions of the engine shaft(s), the indication of the rpm of the shafts does not directly relate to thrust and it cannot be used alone for accurate engine health monitoring. This is due to:

Before starting up, it is important to inspect the intake and make sure it is unobstructed, ensuring the rotating assemblies are free to rotate and that the space immediately in front and behind the engine is clear. A pre-flight inspection should also note if any damage is observed, however small.

There are multiple ways to start an engine - a common one uses the secondary engine at the tail of the plane (the Auxiliary Power Unit or APU in short) to provide air to a small turbine that drives the gearbox on the lower side of the engine. This delivers the required torque to spin the engine shaft. The startup procedure includes:


Manufacturer's instructions should always be followed to avoid a hot startup. During a normal startup, the first observation one should be able to make is an increase in the exhaust gas temperature. If combustion isn't achieved within a certain time limit or if the exhaust temperature is too high due to an imbalance of air-to-fuel, the engine must be shut down and the procedure must be repeated. This is not a common occurrence, but quick reactions from the pilot can allow for a quick and safe re-initiation of the procedure, sometimes allowing the startup system to drive the engine for longer to clear any excess fuel.

Another variable that is monitored during startup is the pressure of the oil system. If this rises during startup, the process should be aborted and an inspection should be carried out to determine the cause. Hot oil can build up pressure in parts of the system where it wouldn't be expected and if this leaks into the engine, it becomes a fire and/or explosion hazard.

Most jet engines do not require a lengthy warm-up routine even when taxiing and taking off from cold climates. The rest of the crucial instrumentation and systems are checked by the pilots during taxiing, which saves valuable time for the ever-increasing air and airport traffic. Going back almost a century, piston-driven propeller engines required a half thrust and full thrust ground test before each take off. Of course, modern engines do not require this. In fact, there is a push to keep the time between setting the engine to idle and take off to the minimum due to the relatively high fuel consumption for this period, especially if we consider short-haul flights. This is also the reason why most aircraft taxi with one engine running and start up the second one just before reaching the runway.

During taxiing, it is important to not to be too close to other aircraft due to the risk of Foreign Object Damage (FOD) from objects that might be picked up from the exhaust gases of the aircraft ahead. Clearance to take off does not only depend on traffic, but also on the wake vortex separation required to avoid extreme but short turbulence from the preceding aircraft. Both wingtip vortices and jetwash contribute to wake turbulence and the separation depends on the combination of the maximum take-off weights of the preceding and following aircraft. For take-off, the separation is usually 2-3 minutes, whereas for landing the separation can be 4-8 NM (7.4-14.8 km).

Once the aircraft begins to speed up on the runway and throughout the climb, the engine pressure ratio is automatically adjusted to match the altitude, the temperature of the air entering the compressor and the weight of the aircraft.

Military jets may climb using normal rated thrust or a higher setting such as military thrust. In reality, the time it takes to reach a certain altitude is very similar i.e. the time savings are not significant unless the afterburner is used. However, the stress on the engine and the fatigue debit induced is much higher in the second case. Normal rated thrust is used by default unless special circumstances require more thrust during take-off and climb.

In commercial planes, the normal rated thrust is used in the vast majority of flights. If it is possible to use a thrust setting that is lower than the normal rated one, this can be done as it benefits the engine and generally has little effect on the total journey time.

In both cases, the crew is supplied with checklists and diagrams to monitor the healthy operation of an engine during the climb. The fuel consumption rate, the engine pressure ratio, the exhaust gas temperature and the engine revolutions are the key variables.

In cruise, modern aircraft require little effort for monitoring the engine performance under normal conditions. The pilots can focus on navigating through the flight path, as the on-board computer normally takes control of adjusting engine parameters in response to changes in the environment.

Unless an accident occurs, the operation of a jet engine during cruise is very steady and does not stress it as much as the earlier flight stages.

Aircraft with turbofans and turbojets are able to descend quickly, but they also need to be able to respond to changing circumstances around the approach and landing. In busy airports, it is common to assign incoming aircraft a holding altitude and pattern while their time in the queue to land comes. Once clearance for landing has been obtained, the manoeuvre from the holding altitude to the final approach should be fairly quick. However, due to the relatively slow acceleration and weight of civil aircraft (even with little fuel left), the approach velocity is relatively high so that the aircraft can climb again if the landing has to be aborted for any reason.

If the landing goes ahead, thrust reversers are employed soon after touchdown, if the engines are equipped with them. The use of thrust reversers also mitigates the risk of exhaust gases being recirculated into the engine as the aircraft slows down. Larger aircraft with 4 engines usually have thrust reversers on their two innermost engines. This is to save weight and minimise the risk of Foreign Object Damage (FOD) as the outermost engines usually sit outside the width of the runway tarmac. The Airbus A380 is an example where this arrangement is used, but the Boeing 747 and the Airbus A340 both have thrust reversers on all four engines (but the wingspan of both is considerably smaller than that of the A380).

The engine revolutions are often increased slightly to make efficient use of the thrust reversers before it's lowered again and the reversers are retracted. At a ground speed of less than 100 mph, the braking is mechanical only until the aircraft slows down to a taxiing velocity and exits the runway.

Once the aircraft has reached its parking position, shutting down the engine is achieved by cutting off the supply of fuel to the combustion chamber and letting the rotating assembly naturally come to a complete stop. Some older engines do require to be operated in idle for some time before shut down if they had been previously operated at very high revolutions.

Following the interruption of the fuel supply, the rest of the auxiliary engine systems are turned off and attention is paid to ensure nothing abnormal occurs.

Jet engines are very reliable machines and are able to deliver thrust across a range of minor malfunctions if these arise. The possibility of an engine failure, particularly one mid-flight, is rare but existing and for this reason, thorough emergency procedures are in place.

If a jet engine shuts down during the flight, it is possible to start it up again following the usual procedure and by using compressed air from the running engine or the APU. If an engine shuts down while still on the ground, the beginning of the startup sequence is prolonged (driving the compressor from an external source) to clear the engine of unburned fuel.

For more serious incidents, the source or indications for damage or malfunction are thoroughly documented and passed on to the ground teams. In very particular cases, a problematic engine might have to be temporarily replaced while an overhaul takes place which will typically involve replacing a number of components with new ones.