Arguably, the noise of jet engines is an exciting sound to engineers and aerospace enthusiasts. Alas, this doesn't include the majority of the population and particularly those living near airports. As such, there is a lot of discussion about noise control both from a design point of view (sound-absorbing liners) and an operational one. For example, certain airports operate a point-based system for night flights - each aircraft contributes a certain number of points based on its effective perceived noise and the total number of points for a given night shall not exceed a certain limit to minimise disruption. In cases like that, airlines are more likely to prefer relatively quieter aircraft in order to maintain a certain flight or schedule.

Effective Perceived Noise Decibel (EPNdB) is the unit of measurement of noise for aircraft and engines. Most will be familiar with the decibel which is a measure of the pressure change that a certain sound is associated with. The EPN takes into account the sound intensity over a 10 second sampling period and also includes an adjustment for the frequency of the noise. For reference, the PNdB level in a busy restaurant will be between 75 and 80.

The three main sources of noise from a jet engine are the compressor, the fan and the exhaust. Quantifying the noise level from each source depends on different variables, but a common factor is an exponential relationship with the flow velocity. However, the overall noise contribution from the exhaust is higher than that of the compressor or the fan and as such reducing the flow velocity in the exhaust would have a much bigger influence on noise reduction. 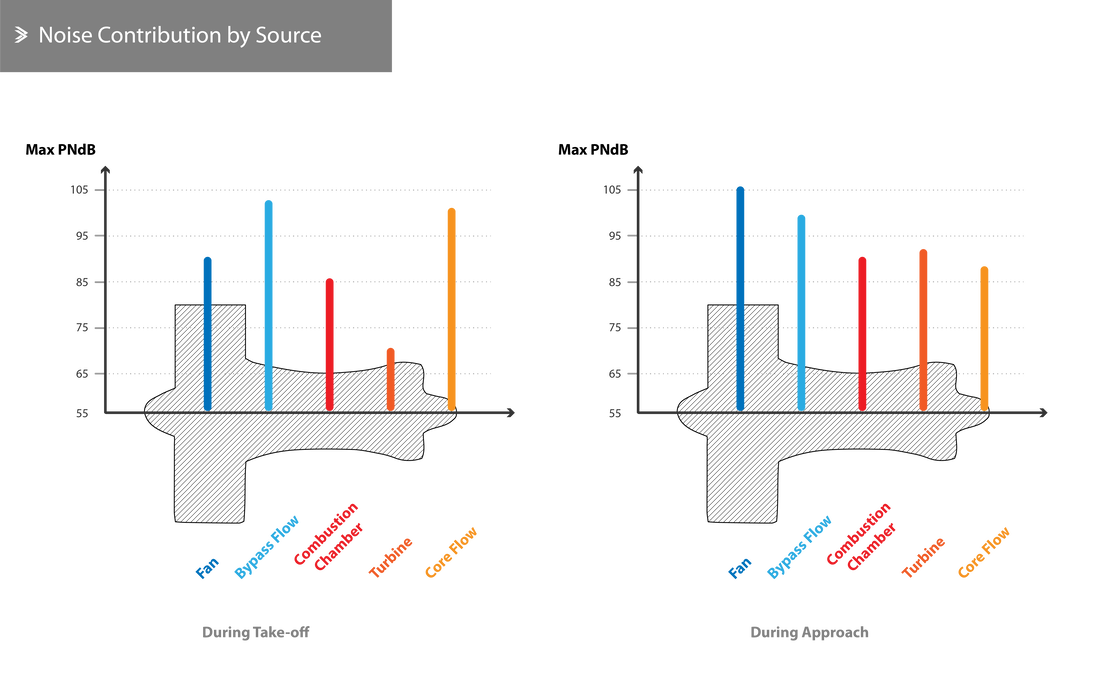 The noise generated by the compressor and the fan is a result of the flow of air around the blades both:


In low-bypass engines, the exhaust noise reduces with a drop in exhaust velocity, but in this case, the noise from the compressor becomes more noticeable. In high-bypass turbofans, the noise from the exhaust and the turbine is somewhat reduced, but the compressor noise may be more noticeable. From a noise point of view, using a single stage fan without inlet guide vanes (IGVs) is significantly quieter than a multi stage fan with IGVs. 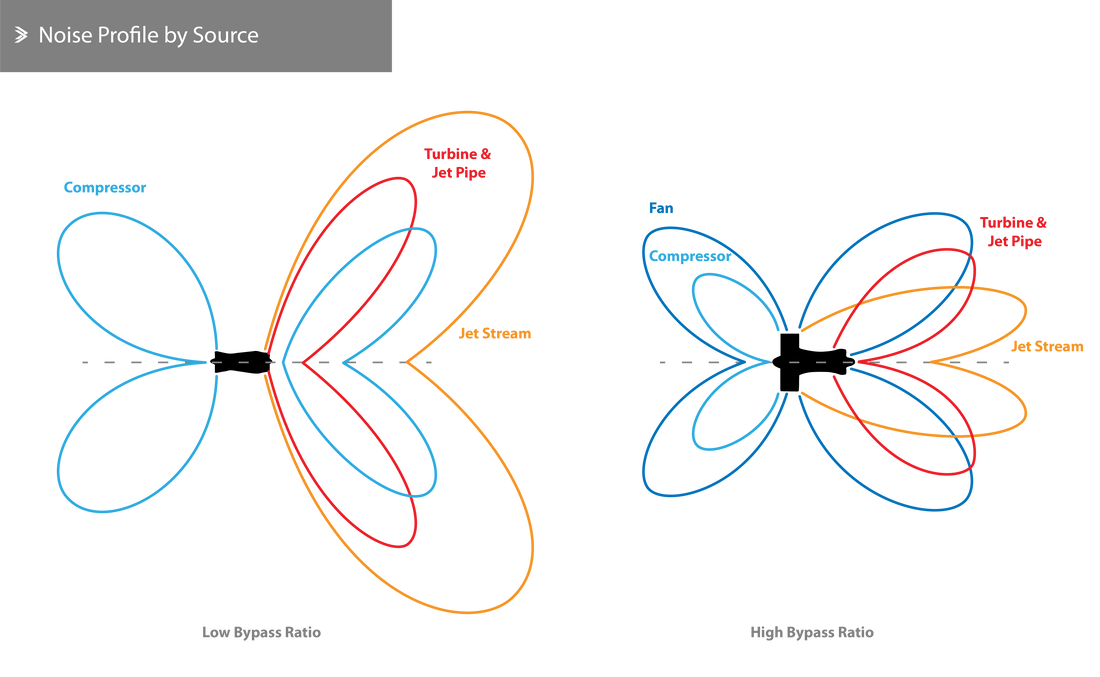 As we mentioned above, the exhaust can contribute a significant proportion of the generated noise. The design of the exhaust nozzle can make a big difference to the mechanism that drives the noise generation; the mixing of the two flows with very different characteristics and the turbulence between them. Modifying the nozzle to allow for more gradual and/or more aggressive introduction of one stream of air to the other can lead to:


​Hush kits were used to reduce the noise of earlier turbojets using these principles. Another example is the use of chevrons in much newer turbofans with medium to high bypass ratios. Generally speaking, the higher the turbulence and the larger area over which it develops, the higher the noise.

Certain modifications in the exhaust design can come with a minimal performance penalty, but others (including the hush kits) are associated with a considerable weight and cost addition that raises the specific fuel consumption and this is why they are rarely encountered nowadays. 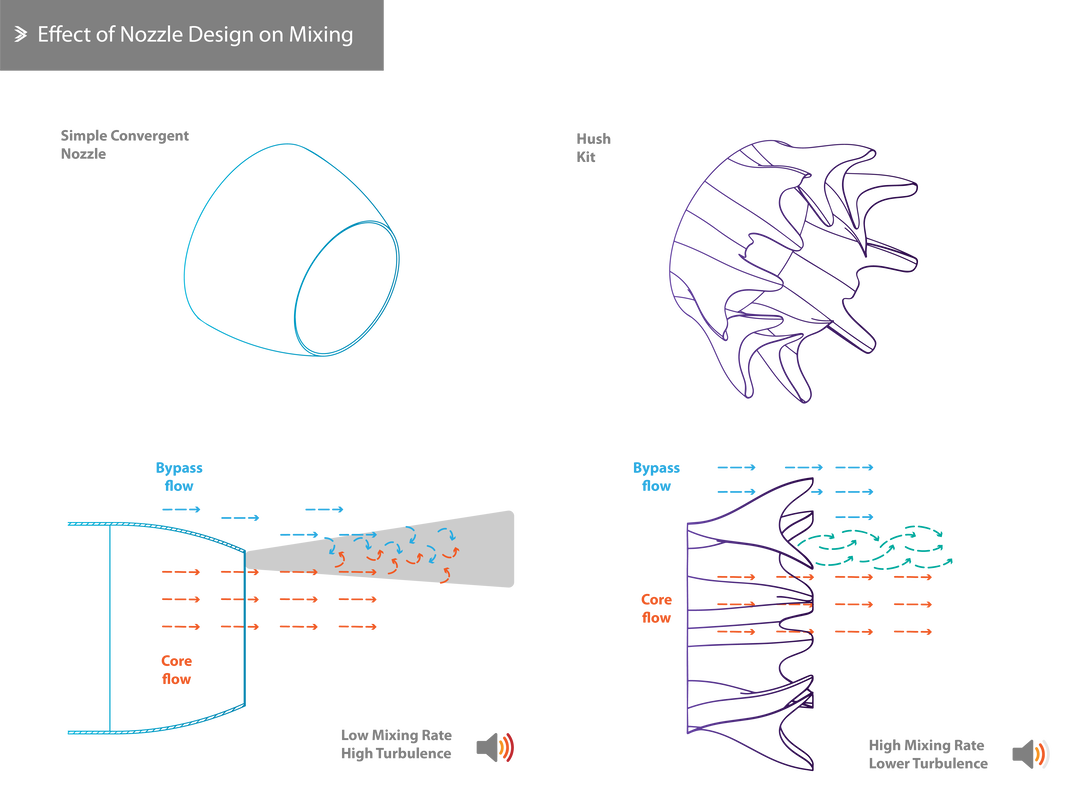 In dual-spool engines with high bypass ratios, the compressor and the fan are also main sources of noise. One of the few practical solutions to reduce the noise of the fan is to reduce its rotational speed. This is even more easily achieved in triple-spool engines, as the fan can rotate at the slowest speed without affecting the performance of the two faster-rotating spools. However, in cases where a variable exhaust nozzle is also used, it is worth remembering that a reduction in exhaust area to sustain a slower rotational speed will also lead to an increase in the exhaust gas velocity, which makes it noisier.

Another, widely used method of reducing the engine noise is through the use of certain sound-absorbing materials that are placed around the casing and within the nacelle of the engine. These commonly consists of a perforated metal sheet supported by a honeycomb structure, which is optimised to reduce noise across a certain frequency range. Acoustic liners are relatively light, effective and do not contribute to a significant increase in the specific fuel consumption which is why they are effectively used in all modern turbofans. 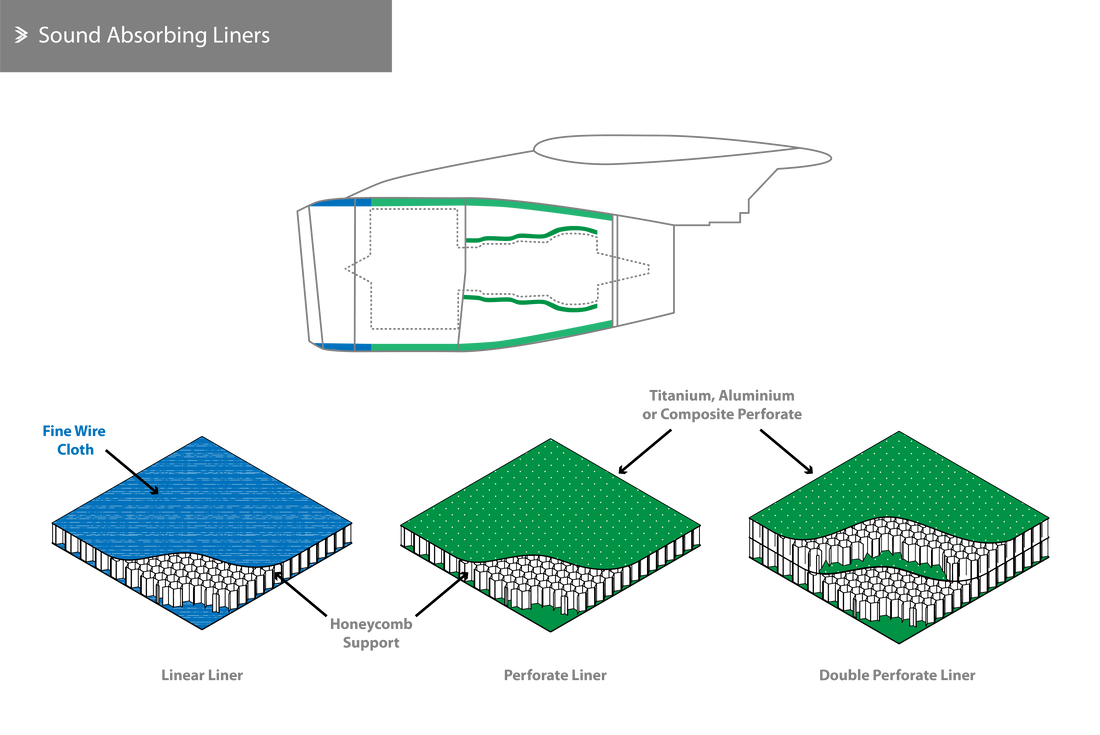 Exhaust nozzle attachments that reduce noise are made of temperature-resistant alloys and are often manufactured in symmetric segments that are then welded together.